House construction on a hillside poses certain difficulties for builders. They have to scoop out shelves (terraces) from the slope so the various storeys can each sit level. The storeys can then either be staggered backwards to mimic the incline or else each one can be bigger than the one below as each level gets higher up the hill.

Importantly, as we were told, builders like to have their materials kept above the build rather than below so in our case this would mean effectively placing them on the ridge of the hill. Hence the ridge would have to be levelled to provide such an area that was both large enough and flat enough.

But most problematic of all was the fact that none of these materials or machinery could traverse 300 feet of steep scrubby hillside land leading to the plot without there first being some kind of roadway in place. In fact, not only a roadway to the lower part of the house where cars would enter, but also an additional temporary road alongside the house to the ridge for the construction vehicles.

We had got a good quote for constructing a road from Abraham Pope but we thought we should also get a quote from James Stafford at Sky Construction.

When we got Sky’s quote it talked about culverts and slipper drains and generally seemed to take full account of the intense tropical downpours which would periodically swill gallons of water down the hill side. We looked back at Pope’s quote which mentioned nothing of drainage. When quizzed, he reckoned he had included for drains but the word ‘drain’ was not mentioned once in his quote so we decided to go with Sky for the road as well as the house. This also meant some discount could be given when the machinery deployed for the road construction could be used to prepare the site for building the house at the same time.

One thing we knew about would be the substantial amount of excess earth to be dug out of the hillside. This would cost us to transport away but a builder we talked to early on had suggested these ‘spoils’ could be just dumped over the ridge and into the sea below. We were sceptical but mentioned it to Sky in an email. He reported some days later had a word with the appropriate minister for local affairs on the island and he said ‘That’s fine’ …and his verbal say-so is all our builder needed. We mused that in the UK this would have necessitated discussion at a council meeting, all nearby residents consulted for views, a report evaluating environmental impacts, probably a subsequent public enquiry and somebody somewhere would have needed to be compensated.

We asked the builder by email if we would be able to name the road. In equally typical Caribbean fashion there was no need for the government or local authority to be involved — it was a private road and we are building it so of course we could name it. Hence in view of my recently departed brother Brian who loved the Electric Light Orchestra and the fact our builder was called Sky Construction we will named it ‘Blue Sky Way’. 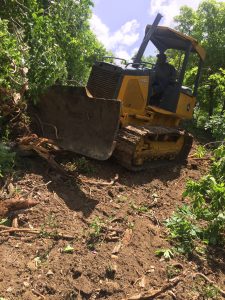 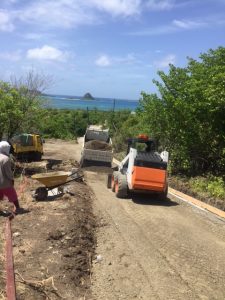