With Christmas fast approaching it seems the right time for a further update and a little reflection on the year.

We spent a week on Grenada and it proved very useful.  First priority was to look at cars and we had been put in touch with “Short Man” by our builder Sky who suggested this was the man to help us find something suitable.  We speculated whether Short Man would prove to be short or actually very tall but, having finally tracked him down, it turned out that his name did describe him accurately!!  He showed us a couple of cars which we were very tempted by, and we also found one or two others through our own investigations.  After some debate however, and to the disappointment of both of us (and Short Man), we decided to park the car purchase (no pun intended) for fear of spending money we really needed to finance the house build, and to revisit this decision once we were clearer on how far our budget was going to stretch.

We visited all the building merchants and home stores we could find around and about St George’s and purchased quite a few items which would make living in our current small apartment a little easier.  We chose both interior and exterior floor tiles, which Sky has subsequently ordered and had delivered.  However we were unable to find any kitchen units or bathroom suites we were happy with.

We were happy to return to tranquil Carriacou after our action-packed week and came back on the ‘Amelia’ which is cheaper, but slower, than the ‘Osprey’ and is predominantly a cargo ship (in fact likely to be the ship on which our container eventually arrives on Carriacou).  We were amused that, just as we were leaving the harbour in St George’s, the ship had to turn around to allow a Flow employee to get his van, which he had somehow managed to leave on the quayside – more of Flow later.

Following our return we realised that we really needed to get back to the UK to purchase kitchens/bathrooms for both our house and the guest apartment sooner rather than later and arrange for them to be shipped over in our container.  As we were still without our own internet service I managed to speak to British Airways and changed our flights to mid December.

We had been led to believe by Flow that they would be able to install our broadband internet as soon as we got back from Grenada, but once back Flow told us that they were still having technical difficulties with their new service.  To cut a long story short, after a number of promises being broken, and Martin finally losing his temper with them, we finally got connected last week – ironically just a week before we come home.  However even that one week of being fully online has been extremely useful in allowing us to research many things we need to buy when we get home (and for me to write this blog in the comfort of our air-conditioned apartment!).  I just hope the service is still working when we get back!

The builders had achieved far more than Flow in our absence I am pleased to say, and have continued to do so since we got back – the pictures show how much progress has been made and we are now able to wander through the rooms of the bedroom and bathroom level and really start to imagine how it may feel to live there.  We even sat on the patio outside our bedroom on Saturday evening admiring the view and had our first beer in our new home. 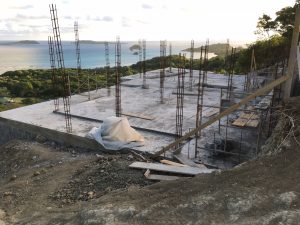 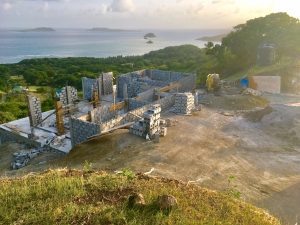 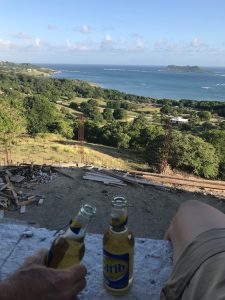 We have also managed to get more clarity from the shippers and Sky on how to organise a container being loaded with our belongings in Birmingham and getting not only to Grenada but then on to Carriacou – I am sure when you have done it once it seems fairly straight-forward but until then it feels like a logistical nightmare.  Sky has been great and is going to organise the shipping over from Grenada using his contacts.  As he also wants to buy our container (more often these are just hired) it means we can leave it at the bottom of our hill and unload it in a more leisurely fashion than the three days generally allowed for within the hire cost.

Reflecting on the past 12 months we are amazed at how far we have come.  This time last year we were in the early stages of getting the necessary documents together to apply for our Alien Landholders Licence.  Since then we have successfully got the licence, bought the land, designed the house,  had a road built, appointed and put to work a builder, sold our house in the UK, bought our small flat in Lichfield, had a mad holiday in the US in the midst of everything else, moved and started to make a life for ourselves out here.  I am not sure how we have managed it on reflection but am very glad we did.  No doubt there are further trials, tribulations and tears ahead but hopefully excitement, laughter and a sense of achievement too.

So now, back to snowy England to catch up with family and friends over Christmas and then a busy time making all the necessary purchases prior to the container being shipped mid-February, around the same time as we plan to head back here.  Who knows what 2018 has in store – but that is all part of the fun and the adventure!

Merry Christmas to everyone – and good luck in 2018