Last week we went to look at the fairly limited number of suitable cars for sale on Carriacou.  The most important factor was that the car could get up our hill, and that immediately ruled out one of them.  Of the others, we decided on one, a Nissan X Trail, which we thought would be the best option.  It was a little nerve wracking as we really didn’t know the process for buying a car over here but, following a little haggling over the telephone on Friday, we met the owner, Gladstone, at the garage at 9am yesterday, where he was having 4 new tyres put on for us.

From the garage Gladstone drove us into Hillsborough in his truck.  First stop was the Post Office to complete the  ownership transfer documents.  The entire record of cars on Carriacou is maintained on cards, neatly filed in a cardboard box!  Paperwork completed, we paid the required fee and then went over to the insurance company.  Having presented ID, driving licences (brief interludes whilst I went to the police station to get my Grenadian licence and Martin went into Flow to get a utility bill as part of the ID requirements) and filled in the necessary forms we went on our way, having been told that we could come back after 12 noon to collect the insurance certificate.  Then it was back to the police station to get permission to move the car to the inspection centre as its licence had expired – the necessary form was issued, giving us roughly a 3 hour window to get the car through its inspection.

Back at the garage we picked up the car (still accompanied by Gladstone) and headed to the inspection centre via the local car wash (meeting Tavon there, who apparently is Carriacou’s Mr Clean, and a potentially useful guy to know).  The  inspection is equivalent to an MOT in the UK (in some ways!) and required before the car could be licensed and driven away.  The test appeared to consist of a check of the lights, indicators, horn and windscreen washers – it didn’t appear to involve any requirement to look under the bonnet (hood – if you prefer!) nor did it matter that it had a large crack in the windscreen (new windscreen on order) but it had to be clean, hence our stop at the car wash.  It passed!!  However we couldn’t be issued with the licence until we could present the insurance details.

Having returned to the Post Office to pay the inspection fee, we were feeling very pleased with ourselves as all was going swimmingly!  Checking back with the insurance office in case the certificate was available early (it wasn’t) we let Gladstone go on his way and adjourned to the Kayak cafe for a celebratory glass of soursop juice whilst we waited for the insurance.

The rains had arrived the previous evening which were very welcome:

However it turned out that this had had an impact on the insurance company’s internet connection and so when we returned to the office for the third time they were unable to guarantee when they could let us have the certificate and policy details.  We had a car ready and waiting to drive home in but seemed to be about to fall at the last hurdle.  Frustrated but undeterred, we cancelled that insurance application and went to a second insurance company down the road.  The kind lady in the Antillean General Insurance office postponed her lunchtime break (I think she took pity on us when she heard we needed to be home in time to see England play their first game in the World Cup!) and after about an hour we left the office with the required insurance details, headed back to the inspection centre and were issued with the licence to place on our (cracked!) windscreen – we were legal and mobile!! 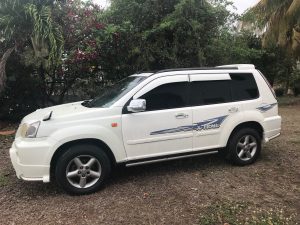 We made it home in time to see England win (just!) their match against Tunisia – then we drove up to the house in our own car for the first time, considerably easier than going by bike and on foot!!