It is tradition to have this ceremony which involves the local fiendishly-strong rum called Jack Iron being thrown on the ground.
This might mean that the land or the build would be blessed with good luck or that your life on the plot would be forever enriched with alcohol. It might have been neither but a wetting is a damn good excuse for a hell of a party on an island that does not need much of an excuse to have a good time, drink excessively and party.
Our wetting was particularly symbolic because conspicuously absent was the recently departed Barba without whom none of us would have congregated at that location that day.
The wetting seemed to go well and most of the friends we invited made it up the hill to join the team doing the build. Most people came in vehicles and we were very surprised we could accommodate about seven without any of them falling off the cliff.
The wetting itself was a bit tricky because it was so windy that most of the rum and water that was thrown onto the ground got snatched by the wind and either ended up on the legs of people standing nearby or got blown some miles out to sea. Nevertheless some managed to touch the ground as it was required to do.
In keeping with island tradition small coins had also been buried in the four corners of the foundations. This would have been done right at the beginning of the build in a wetting that was ahead of our symbolic one since without these tokens of good luck superstition would very likely have meant the builders refused to work on our house. 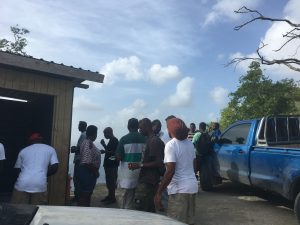 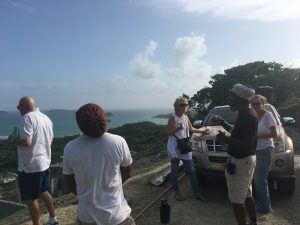 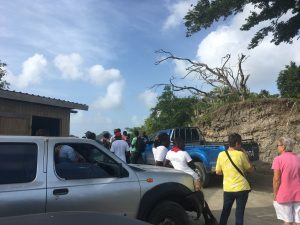