On the 29th of January Sky will have finished the blockwork on the second floor and will commence construction of the roof.
Within a couple of days the main roof members of the new roof will be in place and tradition on Carriacou dictates that for the duration of the roofing that a red flag is flown from the roof apex. The unfurling of this flag will coincide with a rare ‘blue moon’ being the second full moon within a calendar month.
As any football supporter knows Blue Moon is the song of Manchester City and as such a red flag to a City supporter like Liz my wife is like a red rag to a bull.
Accordingly, we have convinced Sky to fly a City flag above the traditional red flag so are now in the process of trying to secure getting one to be couriered urgently to Sky.
Watch this space for photographic evidence hopefully of a blue flag flying high. 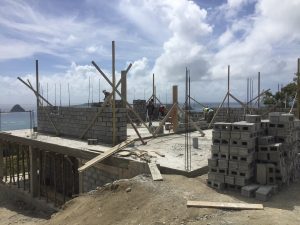