Now Martin and I are not sailors so, having never been to a Regatta before, we weren’t sure what to expect, we just knew it was a big thing for the island.  We did our preparation and consulted various published itineraries for the weekend which were a little confusing as they did not generally bear any relation to each other, either in terms of events or their timings and so we were not sure where to be, when!  However Saturday saw us set off into Hillsborough for 10am as one of the itineraries suggested that the first race would start then.  We couldn’t find any evidence of it!  So we headed off to Windward – after all this is where the boatbuilding, for which the island is well known, is done, so something must be happening there.  Indeed, we found a small clutch of people on one of the jetties, and a number of yachts milling around at sea so we sat around for a while, until a flurry of excitement told us that the race had started.

As soon as the boats had set off everyone decamped and headed back into Hillsborough, as did we.  Sadly the heavens opened for the remainder of the day so we headed for home.

Sunday was a much better day, and on returning to town, everyone was in high spirits, whether racing, swimming or just “liming”. 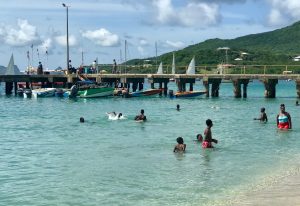 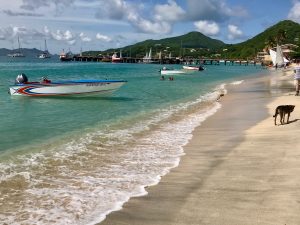 Monday was a Bank Holiday and the last day of the Regatta.  We had heard that there would be onshore activities so went to take a look.  We hadn’t anticipated having so much fun – Main Street was closed to traffic and the islanders were out in force and determined to enjoy themselves.  Here is just some of what we saw:

Yes – the musical chairs was for adults, although they did eventually let the kids have a go for one round!

The Greasy Pole competition made for entertaining watching and a few “ouch” moments as the guys fell off time after time, not always very elegantly!

And my personal favourite – The Donkey Derby, look at them go (well some of them!!):

By the time the last one came in, I’d stopped recording 😂

So that was our experience of Carriacou Regatta – we have no idea if it is typical of Regattas generally, but suspect not!  However it is the longest running regatta in the region so they must be doing something right – and we, at least, will be looking forward to next year!